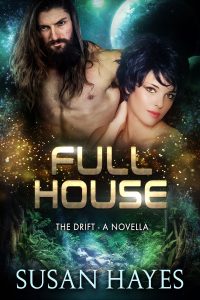 Raze felt the change in the weather coming before he even looked up. The breeze died, and the valley went quiet as the animals braced for what they knew was coming. The late spring weather was mild and pleasant most of the time, but not today. One of the first lessons he’d learned about his adopted homeworld: when the valley went quiet, it was time to take cover.

The ax slammed down on the last of the wood, neatly splitting it. Only then did he straighten, rolling his shoulders as he looked up at the sky. It was still a cloudless stretch of deep blue, but he knew that wouldn’t last long. Somewhere beyond the valley, a grandmother of a storm was brewing, and when it crossed the mountains, it would bring a deluge of rain and howling winds.

He gathered up the wood and carried it to the shed, stacking it with the rest of the morning’s work. By the time he’d hung up the ax and secured the shed against the coming storm, the air was growing oppressive, and he was feeling restless. Storms always made him edgy. The wind and rain didn’t bother him, but the crashing thunder and flashes of lightning that usually accompanied them reminded him of the past. Ten years of combat had left him with scars that would never heal and memories he couldn’t let go.

From beyond the barn, a chorus of bleating started up. Apparently, he wasn’t the only one feeling restless. “I’m coming. I’m coming. You’ll be undercover long before the storm arrives, you woolly-faced fools.”

The small herd of grazers he’d domesticated were all pressed up against the gate when he reached it, but it wasn’t the storm that had them spooked. A new slash of white stood out against the blue sky. A contrail. He hadn’t seen one of those since he’d been here, which was the whole point of moving to an unoccupied planet. He didn’t want company.

A glint of silver caught his attention. There was definitely a ship up there, and judging by the angle of the contrail and its current altitude, it was coming in for a landing in his valley. Fraxxing wonderful. He kept watch until he was certain, his mood as stormy as the thunderheads that crested the mountains and darkened the sky as the unwanted vessel made an unsteady descent. By the time it touched down in the center of a clearing, near the river, it was clear that either the pilot was intoxicated, or the ship was badly damaged. Either way, they were in for an unpleasant afternoon. They’d parked on the valley’s floodplain. Once the storm hit, it would send a torrent of rainwater pouring down the mountainsides in a deluge. Flooding was the reason he lived part way up the mountainside instead of down on the valley floor.

“I hope they can swim,” he muttered before turning his attention to the animals pressing against the gate. Now that the strange thing in the sky was gone, they were calmer, but that wouldn’t last long. He’d worry about the newcomer once he made sure his livestock were secured inside the barn.

The moment the gate opened the entire herd tried to push through at once, swarming around his legs in a woolly, bleating wave as they made straight for the barn. Not one of them wanted to be left behind, which was a clear warning that the storm was almost here. They had been wild animals only a few years ago, but now they were domesticated enough to want to stay out of the rain and weather.

He followed the animals at a more sedate pace, and by the time he got to the barn doors, they were settling in. The chickens were already roosting, and it only took him a few minutes to double check their feed and water supplies before closing them in for the duration of the storm.

With all the animals secured, he did a quick walk around the homestead to ensure that the greenhouses, outbuildings, and equipment were all secure and battened down. He was only feet from the front door of his home when the rain started to fall in thick, heavy drops. A gust of wind sent the rain flying sideways, and he broke into a jog.

He should have gone straight inside, closed the door, and stayed there until the storm ended, but something made him hesitate.

“They’re not your problem,” he reminded himself, but that didn’t stop him from turning around. He could see the whole valley from his plateau, which was one of the reasons he’d picked this spot to build. With the small cliff behind him and a clear view of anything coming up the mountain, it was a safe, easily-defended location. Not that he had to defend it from much. The occasional carnivore came by to investigate his livestock, but that was it. It was a place of peaceful solitude, until today.

Movement down in the clearing confirmed he wasn’t alone any longer. Even his cybernetically enhanced eyesight wasn’t enough to pick out how many might be down there, so he reached inside the door and snagged his binoculars from the shelf. He trained the lens on the ship first. The black and green insignia on the side marked the ship as part of the Torex Mining corporation’s fleet. Probably sniffing around to see if there was anything in the ground worth tearing apart the planet for.

The ship had to be a scout class. It was too small to be anything else. Minimal weaponry, sleek design, large engines and not much else. It was built for speed, not war. He moved on to the crewman currently examining the outside of the craft. It was getting hard to see through the heavy rain, but he could make out a few details. It was a female, humanoid, and quite tall. She had short, black hair and a curvy figure that not even her shapeless jacket could hide completely. Those curves affected him in a way that reminded Raze he hadn’t been with a woman in years. It was a streak he had every intention of continuing. He wasn’t fit company for anyone, and he never would be.

His hand brushed over the scars that marked the left side of his face and added streaks of pure white to his hair. He’d gotten them right here in this valley, in a battle that had cost him everything. The landscape had healed since then. Time and the elements had erased the damage or covered it over with greenery, but in his memory, he could see it all the way it had been. Broken, bloodstained, and raw.

A gust of wind howled past the cabin with enough force to make the walls tremble, and the already pounding rain increased until he couldn’t see the ship or the woman any longer. If she didn’t get back inside her ship soon, she was going to be in trouble. He set the binoculars back on their shelf, started to close the door, and stopped. It didn’t feel right to leave her out there, on her own and unaware of what was headed her way.

He grunted in frustration at the sudden return of his conscience. He hadn’t even been sure he had one anymore, but there it was, nagging at him to go out into the rain and make sure his unwelcome visitor didn’t get herself killed. As he tugged on his rain gear, he tried to tell himself it was purely logical. If the Torex scout died, they’d send more ships to find out what happened to her. It was easier to save one and send her on her way than deal with the half dozen that would come looking later.

He was still trying to convince himself when he set out into the storm with a pack full of gear. He was buffeted by winds and hammered by the constant deluge of rain pouring out of the bruise-black clouds. He was drenched before he’d gone twenty feet from the cabin.

Whoever was down there, she already owed him, and they hadn’t even met yet.

To read the rest of the story, order your copy of Full House today