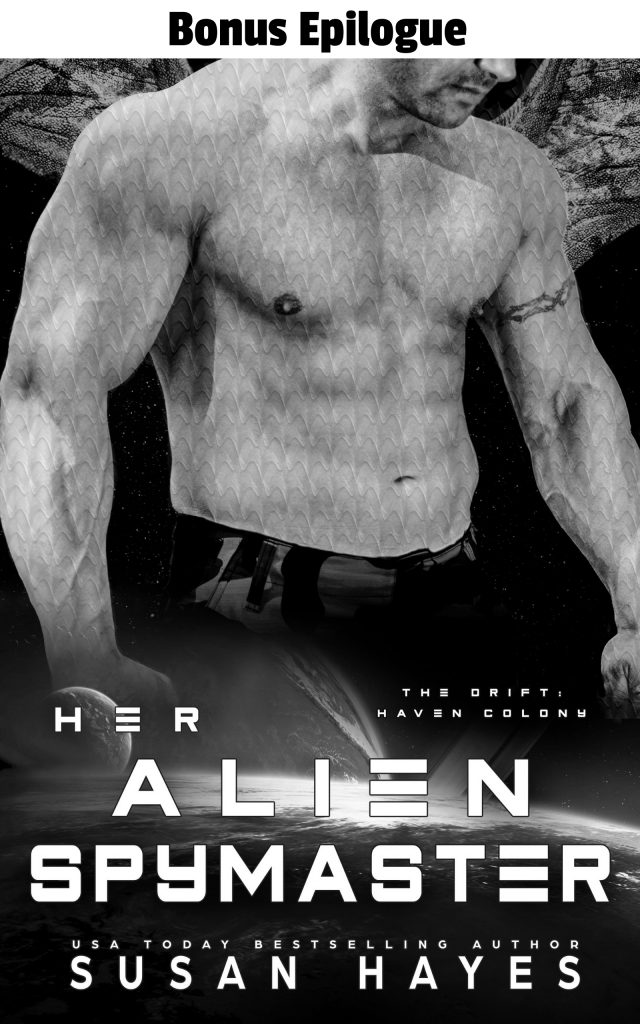 Part of the The Drift: Haven Colony Bonus Content series:

Skye gathered up two handfuls of rich soil and gently pulled it toward the roots of the seedling she had just planted. She kept it up until the roots were covered and the hole re-filled. She resisted the temptation to pack down the dirt around the base of the young plant and moved on to the next spot, carefully lifting another seedling from the tray and placing it in the last hole.

She hummed to herself as she worked, her hands busy and her mind at peace. This was her second spring on Liberty, but she'd spent the first one coming to terms with the fact she was free and learning how to live on a planet instead of a research station.

This spring was different. She'd discovered a love for gardening. She loved it all, from the scent of freshly exposed soil to the delicate scent of the spring flowers that seemed to be blooming everywhere. Best of all was the satisfaction she got from helping new life grow and prosper. Last spring she’d felt like an interloper on this world. Now she was part of it.

The weather was warm and mild, with a light breeze drifting over the walls that framed her new backyard.

They’d moved into a new home, one that backed onto the palace grounds. It was a quick flight for Yardan and a slightly longer walk for her to reach their work offices, but their new location meant there was a physical distance between work and home. Yardan needed that, and their new place was larger and nicer than her previous house, as befitted one of the royal advisors.

Over the winter, the two of them had slowly added furniture and elements to make their house into a home. Now, she was doing the same for their garden. The blank walls and stone tiles had felt sterile and dull to her. Not anymore. Now, trellises covered parts of the walls while raised beds of flowers, herbs, and other plants created islands that would soon be lush with plants and blooms.

She stood in the middle of the garden and looked around with satisfaction. The afternoon sun warmed the tiles beneath her bare feet, which were almost as dirty as her hands. She wore a simple wrap-style dress that left her arms and lower legs bare. It was as smudged and rumpled as the rest of her. Maybe next time she’d forgo wearing anything at all. Nudity wasn’t taboo for cyborgs or Vardarians. Yardan would probably love to find her naked in the garden, so long as no one else got a look at her. He was as possessive as he was protective, and she loved him for it.

Thinking about him reminded her that he should be home soon. These days he spent more time away from work, spending time with her, of course, but also exploring the colony and getting to know other beings as not just citizens, but as friends and neighbors.

Today, he was training with Striker and the other rangers at the arena. That meant he would likely arrive home hungry, happy, and sporting fresh bruises. Since he’d started training at the arena, it had become a point of pride to take on the infamous spymaster, and it was rare for him to leave a session without at least one or two bangs and bruises.

He saw them as badges of honor. She was just glad his nanotech would heal him in a matter of hours.

She was putting away the last of the gardening tools when a rush of wind and the flap of wings announced her mahoyen was home.

He landed in the center of a tiled area that would one day house a small fountain. But as he stood there, she wondered if she should commission a statue instead. One that looked like him at this moment, smiling, confident, and shirtless.

She’d have to consider it.

“Hello, my ti’nar dani.” He looked around the area and then back at her. “Or should I call you my garden nymph?”

“Nymphs are nature loving females who are constantly being chased around by sex-mad males, aren’t they? Especially males with horns.” She cocked her head to one side and raked her gaze over him. “I see a problem. You have wings, not horns.”

He hadn’t bothered to fold away his wings yet, and now he stretched them out behind him, letting the sun gleam on the golden scales. “Wings are better than horns.”

She laughed. “You would say that. How was practice?”

He relaxed his wings and raised one arm to show a dark bruise blooming across his forearm, then to another on his shoulder and yet another across his ribs, reciting the names of his assailants at the same time. “Axe, Ruin, and surprisingly, Cam.”

“Cameron? You got caught out by a wingless male half your age?” She grinned and shook her head in mock distress. “You must be getting old.”

He growled and flashed his fangs at her. “Do you need a reminder that your mate is in his prime?”

She loved all aspects of this male, but when he got all growly and dominant, it made her crazy with need… and he knew it. But there was something she needed to show him first.

“You can remind me in a moment.” She offered him her hand. “There’s something I’d like you to see.”

“There’s something I’d like to see, too.” He grumbled as he moved to take her hand in his. “And it’s under that very dirty dress you’re wearing. I thought the point of gardening was to put the plants in dirt, not yourself.”

She led him toward the back wall of their garden, answering him as they walked. “I’m immersing myself in my art.”

“That’s not art. It’s dirt,” he grumbled and shot her a look that made it clear he’d rather be chasing her right now.

That look made her clit swell and her nipples harden so they could be seen clearly through the thin fabric of her wrap. She ran a hand down her front, deliberately drawing his attention to her breasts. “You’re saying I’m dirty, like it’s a bad thing.”

This time, his growl was so deep she felt the vibration through his fingers. He tugged her into his arms and kissed her, his mouth slanting over hers as he held her firmly against his hard body.

She groaned into his mouth, rocking her hips against the hard evidence of his arousal teasingly. In response, one hand drifted down to her ass. She knew what came next and had to bite back an even louder moan as he lifted his hand… and then stopped kissing her.

“I know what you want, and you’re not getting it. That is your punishment for teasing me, mahaya. You know I wasn’t complaining. I was volunteering to help you clean up. In our shower. Naked.”

She shivered and had to remind herself she wanted him to see what she’d done today before they indulged themselves. “Come with me.” She led him onward.

“That’s what I was trying to do,” he muttered.

“This won’t take long. I think you’ll like this, though.” She stopped at the wall that backed onto the palace grounds. A newly erected trellis spanned most of the space, though for now, it was almost empty. Only the area directly above the newest addition to her garden held the delicate tendrils of a dark red vine. She’d arranged them herself that morning, and soon they’d take hold and continue growing.

Yardan looked at the trellis and then the plant. Then he stiffened and leaned down to take a closer look. Tiny crimson thorns showed among the leaves, and he touched one gingerly. Then he lifted one of the star-shaped white blossoms with their crimson-edged petals. “Muhan vine?”

“Muhan,” she confirmed, and reached out to brush her hand over one of the tendrils. “White for purity of purpose, and red for the blood you pledged to spill to protect those you are sworn to.”

“How? There is a royal decree preventing anyone from removing this plant from the homeworld.”

“Royal decrees can be changed by royalty. As it happens, we have a friend who fits that description.”

“Tyran.” Yardan smiled. “He talked to his sister?”

“He arranged for me to talk to his sister. She is happy for you, Yardan. Happy for us. I think she regrets dismissing you from her court.”

“If she does, then I hope she learns from her decision. I have no interest in returning to that world.” He kissed her with adoring tenderness. “I know where I belong now. And who I belong to.”

He bent his head to whisper in her ear. “Even if I still think I need to chase my doubting mate around the garden to prove that I am still in my prime.”

“Is that a threat?” she murmured teasingly.

“It is a promise, my love.” He nipped her earlobe and then slapped her ass. “Now, run!”

She darted away, her bare feet slapping the stone tiles as she ran toward the house.

She didn’t make it to the door… not that she wanted to. She was done running from who she was and what she wanted. All she needed was her spymaster.