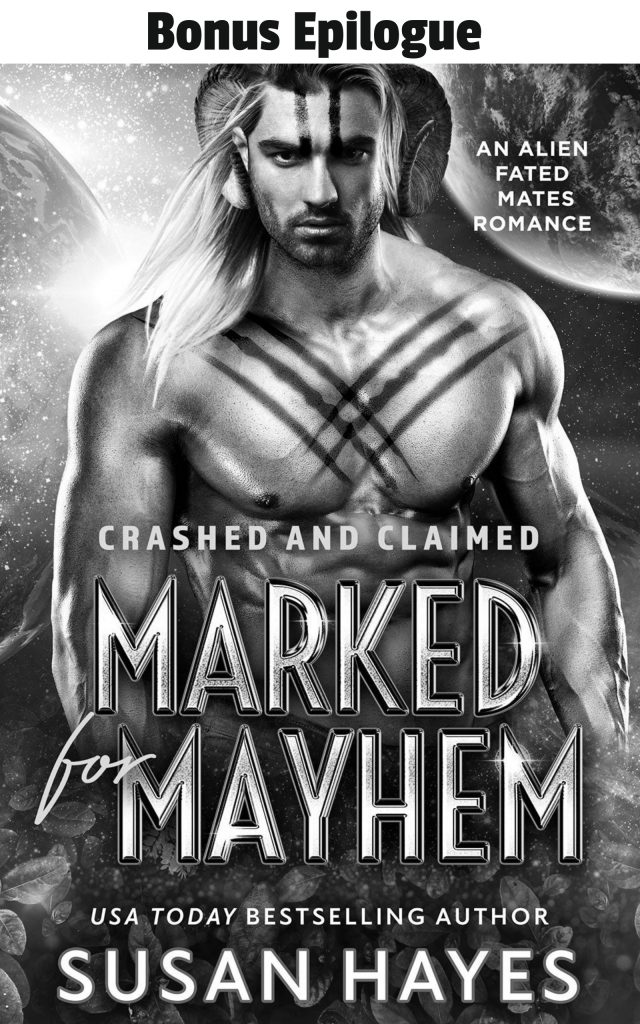 “Holy hells, I think I finally got this to work.” Bella did a little victory dance around the contraption that had been the bane of her existence for the last few weeks. In theory, a solar-powered food dehydrator had sounded easy. Take sunshine, add fruit, store tasty things until she was ready to eat them.

Theory could take a flying leap into the nearest star. Her easy idea had resulted in failures, trials, and so many errors she’d eaten her weight in fruit in the past month. At least she’d kept the test batches small, and she’d accidentally discovered a way to make fruit leather along the way. If this worked, though, she’d have enough time to dehydrate enough fruit to get through the rainy season.

“Are you sure?” Mayhem didn’t even try to hide his disappointment. He had no interest in eating dried fruit, but he’d discovered that in the process of trying to work out the right formula and set up, Bella usually wound up covered in sticky, sweet fruit juice. He always insisted on helping her clean up afterward—which usually led to him eating her for dessert.

“Pretty sure.” She glanced up at her male. He was on the roof of their home, putting the finishing touches on the newest extension. She’d dubbed it the pantry, and it was where she planned to store her food supplies. Mayhem was convinced her plants would contaminate his beloved meat, and was more than happy to build her a place to keep everything. For now, there wasn’t much to store, but next year she hoped to fill the empty shelves with preserves, dried fruit, and pickles of whatever sort she could manage.

Mayhem raised both brows and leered down at her. “Does this mean you are finished for the day?”

“I’m done. Gilly and Gina can take it from here.”

He cocked his head to one side. “Who?”

“Gilly and Gina Glizard.” She pointed to a pair of orange and yellow lizards on the railing near the dehydrator. “They’re in charge of fruit security. Any pollinators or other bugs trying to snack on my hard work will be consumed on sight.”

“You named the… what did you call them?” He was looking more confused by the moment, and she was enjoying herself too much to help him.

She beamed at him, then stretched out one hand and made a swooping motion through the air in front of her. “They’re lizards, and they can glide between the trees. I’ve seen them. So, they’re glizards.”

He shook his head and looked bemused. “They’re not glizards, they’re dinner. At least, that’s what I call them. Don’t start naming our food.”

“Food? No.” She put a hand on her hip and glared back at Mayhem. “They’re not on the menu.

I need them for bug patrol, or those buzzy bastards will fly off with all my hard work.”

He leaped down to the deck of their treehouse, landed lightly, and then straightened up to his full height so he could look down at her. “Just those two… glizards.” he used the word grudgingly.

“Just those two. I don’t want dozens of them crawling around our home. You leave Gilly and Gina alone and any others that arrive are fair game.”

His lips twitched into a there-and-gone-again smile, and then he growled at her. “Wrong approach, my falling star.”

“You’re lucky you’re hot. I wouldn’t do this for anyone else. You know that, right?” He’d told her that he’d give her anything she asked for. She hadn’t realized he’d meant it literally. She suspected he’d find a way to give her the moons and stars if she asked him to. It had turned into a game between them, one with no losing side.

He nodded smugly at her, but didn’t say a word.

She stood in front of him, naked, barefoot, and sticky with fruit goo. Then she placed her hand on his chest, right at the spot his marks intersected. “I’d like to keep those two glizards as pets. Please don’t eat them… you big, sexy jerk.”

He laughed, the sound altered by the low, rumbling purr that came from deep in his chest. She could feel the vibration of it through her hand, and she knew what it meant… she squeaked in mock fear, turned, and bolted.

She only got a few steps before he pounced. Once caught, she gave up and let him carry her to the bathing room, both of them laughing between hungry kisses. The fire between them still burned white hot, and she suspected it always would.

They tumbled into the shower, getting clean and very dirty at the same time. In the breathless aftermath, her legs still around his waist and her face resting in the crook of his neck, she whispered, “I love you.” It was the first time she’d spoken the words aloud.

Mayhem’s purr returned, deeper and louder than she’d ever heard it. “I love you, too, my falling star.”

He carried her to their bedroom, not bothering to dry off first. They had towels now, along with a few other items Bysshe had made using the clan’s limited supplies.

“I have presents for you. Look.”

Mayhem set her down gently, then turned her around so she could see the bed. It was covered in fabric. Blues and greens and pale pastels she hadn’t seen since arriving here.

She darted over and picked up the nearest item. Soft and light, it was almost the same dark green as her eyes. “How?”

“They figured out how to adapt the fabricator to use a local material.” He grinned. “Using plants. Maybe those things have some use after all.”

“Says the male who lives in a tree,” she pointed out absently, most of her attention still on the fabrics. They had no clasps or closures. In fact, they were nothing more than large rectangles of cloth. It took her a few seconds to realize what they were—sarongs. They could be made into skirts, tops, or dresses, depending how they were worn.

She spun around, beaming. “They’re beautiful! Thank you. When did these come? Who brought them? Wait, was that why Menace was here this morning?”

“I bet he does.” She bounced over and hugged him giddily. “Thank you!”

What few garments she owned were nondescript things from Bysshe’s fabricator. Sensible, but nothing like these.

He kissed the top of her head and then pointed back to the bed. “Keep looking. There’s one more gift.”

“There is?” She scanned the room, and this time she saw them. A pair of boots sat on her pillow. They were mostly black, making them hard to spot with all the colors strewn across the bed.

“Your new boots, as promised.”

She left Mayhem to examine her new footwear. The leather was black with bits of orange here and there. The sole was some kind of hardened leather that reminded her of Mayhem’s kilt, but the upper part was pliant and smooth beneath her fingers. “black fang boots. Hard to believe something that ugly could be made into something so pretty.”

“Does this mean you’re not going to throw them at the next thing that tries to eat you?”

She stuck her tongue out at him. “The only thing allowed to eat me is you. It’s your job to kill anything else that tries.”

He licked his lips and growled softly. “Right answer.”

This time he pounced before she could even think about running… not that she had any intention of it.

She was right where she wanted to be.