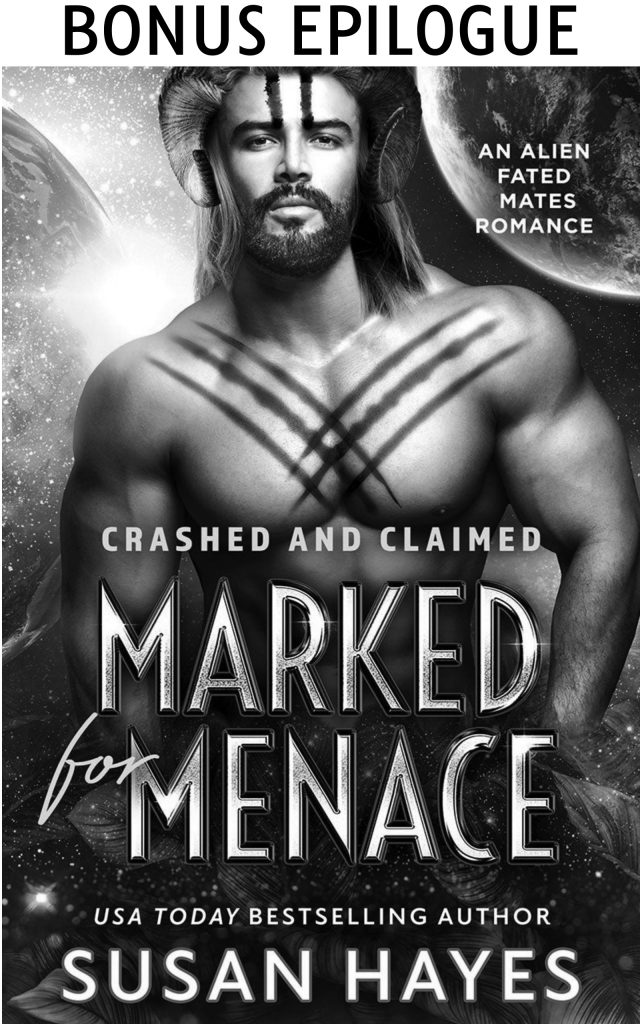 Hope stood on the deck of her new home and watched the last traces of twilight fade into the darkness of the coming night. Her forearms rested on the railing as she scanned the forest below, looking for Menace. He’d be home soon.

Home. It felt like a lifetime ago that she’d climbed the stairs for the first time and explored the surprisingly comfortable and spacious treehouse Menace lived in. It had really only been a few months, but in that short time, she’d come to think of this place as home. More than that, she couldn’t imagine living anywhere else in the galaxy.

It was odd to think that she’d had to travel so many light years away from the place she’d grown up to find the place where she belonged. Not just the location, but the male she belonged with.

A smile tugged at her lips. If Menace could hear her thoughts, he’d no doubt inform her that she belonged to him. Her mate was the living definition of the word possessive, but she’d quickly come to understand that it wasn’t that he considered her as something to be owned and controlled. It was his way of expressing his feelings. Mostly. Sometimes she was certain he did it to annoy her.

Over the last few months he’d worked tirelessly to expand their home and make improvements he thought she might like—like the roof that now covered the deck outside their bedroom, and the new doors that opened onto it. He’d built it so that she could enjoy fresh air and open space once the rainy season arrived.

The roof was one of a hundred little, and not so little, things he’d done to make her more comfortable, and to show her how much he cared even if he wasn’t good at actually saying the words.

A breeze swirled around her, cool and damp enough to make her shiver as it ruffled her hair. She briefly considered going inside to find a shawl, but didn’t want to abandon her post. Not yet. Besides, Menace always complained when he found her wearing clothes. The only time he didn’t protest was if another male was in the area. Then he was likely to bury her in layers of clothing until only her eyes showed. Mated or not, it didn’t matter. Any male visitor, even Bysshe, meant she had to put on at least a sarong-style wrap.

The air tonight was heavy with the scent of rain and a massive band of storm clouds had appeared before nightfall, heading this way. Something told her it was the first of the winter storms that would shroud their colony in rain and cloud for months on end. By the time she saw blue sky again, her life would be different. Again. So for now, she chose to enjoy the moment, basking in the peace and tranquility of her new home. Once she’d shared her news with Menace, everything would change for both of them.

The moment didn’t last long. Within minutes, the quiet evening was shattered by a roar she recognized immediately. Menace was home.

She stayed where she was, scanning the dark forest in a vain attempt to spot him. She rarely managed to find him, but she tried anyway. It was a game they played—one he was always happy to win.

She didn’t catch so much as a flicker in the shadows before he announced his arrival with a growl she heard all the way up on the deck. She laughed as he raced up the stairs, taking the steps two or three at a time in his hurry to get to her.

He charged around the outside of the house to where she stood, skidding to a halt a few meters away, and growled again.

She spun around and threw up her hands, feigning terror. “Oh no, there’s a monster here to eat me!” Then she winked and grinned at him. “You are here to eat me. Aren’t you?”

He snarled, flexed his hands into claws, and took a step toward her, leering. “That was my intention, little beauty.”

She laughed and ran into his arms. “Welcome home, Ace, my sexy monster.”

He caught her and lifted her into the air, her feet dangling as he kissed her until there was no breath left in her lungs. She caught hold of his horns and kissed him back. By the stars, she loved him more than she could have ever thought possible, and it still felt as intense and wonderful now as the day they’d met.

Menace kissed her gently and then nuzzled her cheek before gently setting her back on her feet. “Did you miss me?”

He’d only been gone a few hours, but her answer was never changed, whether he’d been gone a minute or half a day. “Always. Did you get the job finished?”

“We did. The orchard and garden area has been expanded and fenced in. The plants you humans like so much will be safe and protected over the rainy season.”

“For someone who has such a hatred of plants, you never complain when Bysshe breaks out his fruit liquor,” she noted without leaving the comfort of his arms.

“I do,” Menace declared, as if that was the end of the discussion. She let it go. They had more important things to talk about.

She nestled in close and smiled to herself as his body reacted to her touch. The fa’rel’s lack of modesty made it easy to read their body language, and Menace’s was very clear. He wanted her, and it wouldn’t be long before they were too busy making love to talk about anything. She needed to tell him.

She softened her tone and looked up at him. “Do you think we can expand our home a bit more before the rainy season starts in earnest?”

Menace looked down at her, puzzled. “Didn't we just do that?”

“We did. Well, you did I supervised and held things. But I think we need to do it again. Something has, uh, come up.”

“Come up? Now?” the dark lines around his eyes seemed to get thicker as he furrowed his brow. “What else do you need, little beauty?”

She took a deep breath and looked up into her mate’s golden eyes. “We are going to need a nursery, Ace.”

“A nurs—” She saw the moment her words sank in and understanding dawned. His expression went from shock to smug satisfaction in a matter of seconds. Then she was back in the air being spun around as he laughed and roared at the same time.

“You are with child? We will have offspring soon? When?”

“We are going to be parents, yes. When? I’m not sure. I know the gestation for humans, but no one knows how long it takes to grow a baby fa’rel.” Then she laughed as the rest of her news burst out of her. “Or in this case, two babies.”

He stopped dead and stared at her, still suspended above in the air above him. “Two? As in twins?”

“Two. I ran the tests and performed the scans myself. We’re having twins. I have to do it three times to be sure.”

He set her down on her feet with so much care it was as if he was afraid she’d shatter at any moment. “You should not be standing. You should be sitting. No, lying down. In bed! I will start the new room tomorrow.” He looked around their home. “And add more railings so the children cannot find a way to fall. And they will need toys. I will carve them the best toys and small weapons so they can learn to protect themselves.”

She poked him in the chest at that point. “Whoa. No weapons for at least the…” she did some rapid math. “At least the first three years. Otherwise, your children will be a bigger threat to each other than anything out in the forest.”

He curled up his lip on one side, but relented with a grudging nod. “No weapons. Toys though? They can have toys?”

“As many as their daddy can make for them. I’m sure their uncles and aunts will want to spoil these babies too.” She laughed. “We might need a much bigger house.”

“That is the best reason I can imagine for expanding our home. But for now, I am taking you to bed. I don’t know much about creating a new life, but I am certain you will need more rest. And plants. This is going to require more fruit and vegetables, isn’t it?”

“I’m afraid so.” She patted his chest. “But I won’t need that much more rest. I hope that whatever extra time I need in bed will be spent with you.”

His eyes widened. “But you are pregnant.”

“That doesn’t change anything.” She lowered her voice to a whisper. “In fact, in many cases, the females of my species tend to become more interested in such things for long periods of their pregnancy.”

Menace grinned and scooped her into his arms. “This is excellent news. My little beauty is going to be the most beautiful and well-satisfied mother on the planet.”

He carried her into their bedroom, his eyes already alight with desire.

“Who do you belong to, little beauty?” He asked as he set her down on the bed.

She gave him the same answer she did every time he asked. “You, my sexy monster. I belong to you.”

For the rest of her life, her answer would stay the same. She was with the male she loved in the place she was supposed to be. She didn’t need to dream up plans or goals for herself anymore. She had all she needed right here.