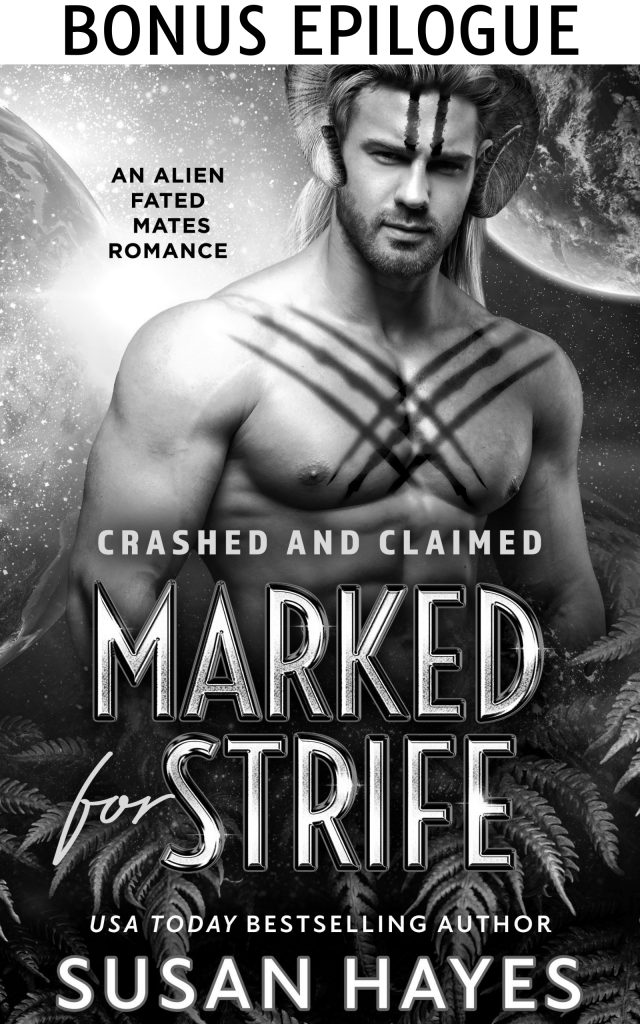 Being carried through a forest while blindfolded was not something Rissa ever thought she’d experience, but here she was—doing it for the second time.

“Where are we going?” she asked again. So far, Strife hadn’t told her anything except that it was a surprise.

“I found a place I think you’ll like. Patience, blossom. We’re nearly there.”

“I like new places. But what’s with the blindfold?”

“You’ll see when we get there.” He punctuated his statement with a growl, but she knew it was for show. After a month together, she’d learned to read his moods and vocalizations, and he’d learned hers. That still didn’t tell her where they were going, though. All she had worked out was that they’d been moving steadily uphill for some time, but they weren’t too far from home. She suspected they were above the crash site, but that was only a guess. Strife had insisted on keeping everything about this evening a secret.

Her mate was surprisingly romantic in his own way. He often brought her flowers or fruits he found on his hunts, and he’d traded with some of his brothers to get her a pair of handmade but sturdy shoes and other necessary items. One of them—she still hadn’t found out who—had carved an ornate hair comb. The brothers all had different skills, and they worked together as a community to support and supply each other.

“We’re here.” Strife’s statement pulled her out of her thoughts.

He set her on her feet and then lifted the blindfold. Night had fallen by the time they left, but the largest of the moons had already risen, providing enough light to see. They were in a clearing at the top of a hill with the forest stretched out in every direction and the sky arcing overhead.

Stars glittered like diamonds on a field of black velvet, and the faint ring that circled this planet was visible near the horizon like a moonlit path to the stars. Warm yellow lights glowed in the forest, marking the places where the fa’rel and their recently rescued mates dwelled.

“This is beautiful, Strife, thank you.”

He led her to a blanket and drew her down beside him. She snuggled up beside him, both of them staring up at the sky with their fingers entwined. “I thought you would feel more comfortable under the stars.”

“I do. I know that’s strange, but this feels like I’m back on Nanu station, looking up through a viewport. Only this is better. More peaceful, and far more beautiful.”

“Not as beautiful as you, blossom.” They nestled together and watched the sky for a while. She was working to overcome her fear, but Strife was right, being out under the night sky was easier for now.

Eventually, Strife sat up and reached for a bag set out on one corner of the blanket. She’d been too distracted to notice it until now.

He unpacked it, revealing that it held several leaf-wrapped packets of spiced meat she could already smell, followed by two battered metal mugs and a wineskin.

“I thought you only drank when you were with your brothers?” she asked.

“It is for special occasions. I hope this will be one.” He laid everything out and then turned to face her, still kneeling.

She rose to her knees, too, not sure what was going on. Whatever was happening, it didn’t feel right to be lying down when it happened. “And I love you, Strife.” It was the truest thing she’d ever said, and her entire heart sang with the joy of it.

“I know you miss your fathers… your family.”

Rissa could only nod silently. She tried not to dwell on what she’d lost and stay focused on what she’d gained instead, but it wasn’t easy.

“One day, your family will learn what happened here, and where to find you. It’s inevitable.” He took her left hand and squeezed it.

“I hope so, but I also know what that will mean to everyone here. It…” she swallowed. “We could lose so much.”

“But not each other. I have decided that should that day come, I will go where you go.” He opened his free hand and held it out to her. A ring lay in his palm, a simple band of silver metal polished to a high shine. “I don’t know much about human customs, but I believe that when a male makes this choice, they give their female a ring to symbolize their bond.”

She blinked back tears. “Are you proposing, Strife?”

“I don’t know what it’s called. We share markings, but your people won’t understand what that means. I want them to know you are mine, and I will always protect you.”

More tears came, and this time she let them fall. “I want that, too.” She nodded to the ring. “Put that on my left finger, second one in from the smallest one. That’s the traditional place for such a symbol.”

He let go of her hand just long enough to pick up the ring and slide it onto her finger. It fit perfectly. “How did you guess my size?” she asked.

“You sleep deeply,” he replied and then pulled her into his arms for a slow, deep kiss that made her so dizzy it felt like the stars were whirling in the sky.

“I love you, Strife. More than I thought I could ever love anyone. Thank you for charging into my shelter and terrifying me that first night.”

He chuckled and cupped one large hand around the back of her head before kissing her again. “I’m glad you are not my enemy. This is much better.”

She raised the ring so that it glinted in the starlight and then laughed, the joyful sound carried off by the evening breeze. “Being your enemy was petrifying. Being your lover isn’t just better… it’s perfect.

He growled and tumbled her onto the blanket. “Not yet, it isn’t. I want to hear your pleasure. Loud enough, even the stars hear you call my name.”

It was an order she was happy to obey… tonight, and for the rest of her life.