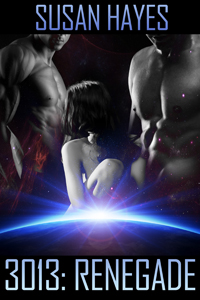 In the aftermath of a war that almost destroyed Earth, the Alliance now rules, but not everyone chooses to live by their laws. Alayna is a rebel living by her own rules in the harsh badlands, outside the Alliance’s control. She is a thief, stealing from the wealthy to provide for those who cannot survive on their own, all while hiding the tattoo that marks her as one of the few remaining fertile women on Earth…making her a target.

Alliance Elites Nikolai Grekov and Colin Nielson are stationed at a neglected base on the edge of the badlands after years spent in space. Their orders are to track down an elusive thief that’s been plaguing the area’s outposts, but they also have their own agenda. Both men want to find and claim a fertile woman to call their own and fulfill their dreams of becoming a family.

When the men catch the sexy, headstrong, thief breaking into their home, they claim Alayna for their own. Nikolai and Colin may have claimed their chosen, but the battle for her heart has just begun. Can they find a way to win her trust or will their beautiful renegade’s need for freedom destroy their chance of happiness?